March, A.A. 2013.
The act of summoning a demon to borrow his or her magic; Kael believed that such a thing didn't exist anymore.
Until now.
He, who was sleeping soundly, was summoned into the circle and was staring blankly at the girl who summoned him.
Her height was slight, reaching only about his waist, with a tall nose, and bright eyes with a hint of silver that were clear and deep. Skin so clear that it looked tender, but a tinge of pink that gave the impressionof a white peach. Her childish look was cute, but that was not all: thin arms and legs, gentle fingers, and the elegance emanating from her figure seemed truly beautiful.
Especially her long, silver hair that barely missed the ground, beautifully shining as though it was spread with a crescent moon's light after it was taken from the moon itself.
Her natural beauty alone was so breathtaking that it made her light-blue silk dress and diamond necklace - that seemed as though it was made professionally - seem like nothing.
Kael thought while looking at the young girl who had the liveliness of a child and elegance that made light of jewelry, and added to that, the deepness that made stars in the sky feel closer to get.
I wonder what happened. Is it a dream, or is it reality?
'Ah, it must be a dream.'
He was sleeping, thus it was a dream. There is no way such a wonderful girl lived in reality. And there is no way a high-class human had reason to summon a low-class demon like himself in this century. Didn't humans already copy almost all of the Heavenly Beings' technology, except those of ancient divine device-class technologies? There is no way they will sacrifice their soul while trading with demonic beings. Like, who will trade in their life and soul for something that can be bought with a coin or two?
'But a dream where such a wonderful girl appears. It's not all bad. Although I don't know how I got to dream of such a thing, let's just watch with the feeling of looking at famous works of art: it is food for the eyes. If there is one thing I could wish for, it would be an older version of this girl. Even right now she has the beauty of a flower yet to bloom, and I have fun thinking about her older appearance; it is a pity that she is not of that age. Maybe I will continue this in a dream tomorrow.'
While he was feeling happiness and pity at the same time, the girl opened her mouth. Her voice was clearer than the Rainbow Crystal Bell in the Central Altar, a bell that Heavenly Beings were proud of, thus adding the happiness of sound to the wonderful being in front of him.
"Serve me, for I am your master." 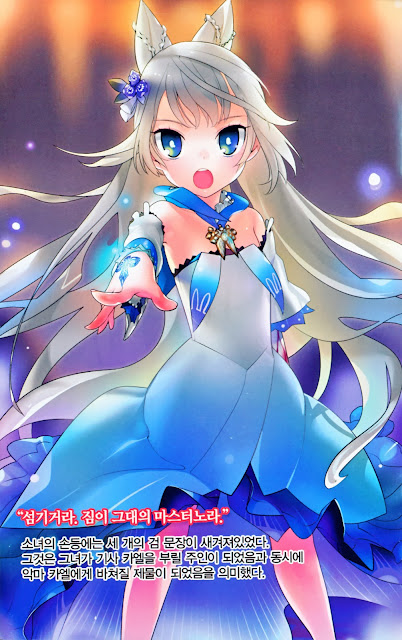 "Ah. That..... WHAT?!"
Kael, who was listening to her voice happily, was startled.
"This is the proof of contract. The sign of becoming the sacrifice that was offered on the Altar of the Six Devils King."
The young girl showed the mark of 'The Three Swords' on top of her hand. Those three transparent swords pointed straight up, down, and middle while being entangled together. It was clearly the sign that represented Kael himself.
At the same time, indicating that she was sacrificing herself for the power of his.
While serving the summoner as master, the demons followed all the orders set by that person. And the summoner gives his or her body, soul, and life as the price of that command. It was really the master who was prey, while the demonic being was predator. That was the Contract of Soul.
"I will order your first task. Reveal your name."
It was conversation unfit for a dream. It was a too-clear sign and the feeling that says the contract had started: language that he shouldn't have known, and this time period's, this location's basic knowledge.
There were definite signals that indicated that this was real. The smile disappeared from Kael, his mouth closing in a straight line. His eyes that were blankly staring closed slightly. Coldness and darkness overcame his eyes. The hand that closed as if it was going to rip apart the opponent stopped with very little composure. But the muscles that tightened to their max indicated that his rage stopped right before exploding. He made a cynical smile by slightly raising side of his mouth, unknowingly making that expression.
'Things like contracts.....'
Once was enough, back when I was ignorant. I absolutely refuse to do it a second time.

*   *   *
10 minutes before summoning.
The young girl looked at her left arm while holding a dagger in her right hand. The girl who wore a big backpack below long, swaying hair was shivering slightly. After putting the blade of the dagger on her left arm, she breathed deeply a few times. Every time she did that, her small body slightly expanded and became small again.
The skin of her arm seemed so soft, that scratching it with even a fingernail was enough to rip it. Above that weak arm, the sharpened dagger slowly approached.
The girl stopped breathing after closing both eyes and mouth, and boldly slashed her arm with the dagger.
"Ah."
A small scream leaked out of her closed mouth. But that was it. While frowning, yet not shedding a tear at all, the girl raised her arm to the bowl. Just like that, blood filled the bowl. The more her blood filled the bowl, the paler she became. Even while that happened, she stood up while not even showing a crying face, nor stopping the blood. Although her leg shook a bit, she stopped the bleeding only after filling the bowl completely with her blood.
"Yulia. Think again. You still do not know what it means to control a demonic being."
Her backpack spoke with a voice like a human's.
"Pristine. Do you know that you have said that 29 times already?"
"Not only 29 times, I will say it 290 times. It is not too late. Stop."
"Then I will say for the 29th time: is there any other way?"
Yulia wetted a quill with her blood and started to draw shapes on the floor. After drawing a circle big enough for a person to stand, she wrote numerous words in there. Every time she wrote a word, smoke came from that word and left purple residue.
She wrote the taboo language of high-class demons without stopping.
"Although you are right… that is still not right. Do you think that the Devil King of Darkness' measure will give you much price for your soul? At most, it will be a 5th-class demonic being. In this age, those beings can't even compare to a single tank."
Pristine tried to stop Yulia even while knowing that Yulia was getting annoyed.
Contents Settings

Stay informed of NEWEST chapters of Queen's Knight Kael with notification directly sent to your email.