After passing through rows of Ginkgos that had been dyed golden, Ao stopped his bicycle before the cafe in the alley and opened the door.

Hiyuki who was writing at the table besides the wall lift her head and smiled.

“Sorry, the committee meeting got extended, did you wait long?”

Hiyuki shook her head lightly. She was writing a new work that would be submitted in December.

After school, he will meet Hiyuki in this cafe to chat about light novels, and discuss the work she had written so far. They will go to places like cinemas or Planetarium occasionally too.

Their classmates refer to Hiyuki as ‘Ao’s girlfriend’, and Ao as ‘Hiyuki’s boyfriend’.

Neither of them denied it.

“The selection result for the entry you submitted in summer has been published on the web.”

Ao sat opposite Hiyuki and said cheerfully, Hiyuki showed a delightful face too.

Watching her sparkling expression that was full of happiness, Ao returned the smile too.

“Congratulations on passing the first stage of selection.”

Hello everyone, I am Mizuki Nomura. As the title implies, ‘Manuscript Screening Boy and Manuscript Submitting Girl: Watched over by the gentle sky, the story of the bashful ocean’ the main character of the story is a high school boy working as a manuscript screener.

When I worked as a screener for the first time, I was moved just like Ao was, amazed that there was such an extravagant job of making money just by reading novels! Making a living by reading manuscripts was such a wonderful thing, so I told the editor I knew:

“Please give the manuscript screening job to me! I love reading! It’s fine even if there are dozens! And of course, I will keep strictly to the deadline!”

I asked the editor, and took on screening jobs for ten serialization, and sent more than thirty prize winners to the second stage of selection.

Some serialization reject my screener application because I am a professional writer, but the most manuscripts I had screen was 200 in one month.

Buried in manuscripts, I felt excited thinking about which one I should screen next. I had fun reading it too, I feel so fortunate to have this job.

Even though I felt happy reading them, I am not good at writing the evaluation sheets, and spent a lot of time thinking about what to write, mulling over it in front of the computer.

Submitters weren’t given evaluation sheets in the past, the trend started recently and was adopted by many serialization. With this change, the number of manuscripts I screen also decreases. If I don’t need to write evaluation sheets, I will want to read more manuscripts.

How about being the judge for the final round of selection? Although I was invited to do that, but it was too much to ask of me!

I took on the role of the screener for the second round twice, but every entry was interesting with great quality, it was really hard to make a choice, I was even thinking about it in my dreams. Just the second round is this hard, there is no way I can take on the heavy responsibility of the final selection. I couldn’t choose any other works except the ones that fit my taste.

I still prefer the work of the first round of selection. I have given this serious thoughts. I like the manuscripts that are full of flaws, passions and chaos.

Among the people reading this right now, there might be entry contestants who received an evaluation sheet written by me. Although my comments were shabby, I put in a lot of effort into writing it. If it was any help to you at all, I will be very glad.

The second half of this work was written while I was hospitalized.

I can remember the night before my surgery, I came to the corridors of the hospital where phone usage was allowed. I sat on the bench, put my laptop on my knees and typed under the dim lights until 3am.

The nurse said that I can work in this zone even after lights out, so I held to what she said and rushed my script here.

I always sleep and rise early, retiring to bed before 12am. But just for this night, I wanted to write as much as I could. Because I didn’t know if I could move my hands or body after the surgery, and there was no telling how much they need to cut off without doing the surgery.

In the quiet corridors, I will sometime hear loud construction like noises, were those the noise of surgeries? Were the doctors still working at this late hour?

Thankfully the evening after the surgery, my body still hurts, but my hand and fingers could still move. So I laid in bed and continue working.

The electric bed that allowed me to adjust the angle is really amazing~ With this, I can continue writing without getting down from bed. I wanted one and search for the catalogue after I was discharge. But I gave up the idea in the end… If I bought it, my sleeping hours will grow longer, and I will just become a lazier person.

Anyway, I finished the love story between the screening boy and submitting girl this way. It wasn’t a story about the publishing industry, but a tale about youth, so Ao and Hiyuki are normal kids.

Konoha from ‘Book Girl’ was bestowed with a talent that was not related to his will, and the fate to write stories. It was the same for Toko, who was a girl that couldn’t live on without reading.

However, Hiyuki didn’t have the talent for writing, and was an ordinary girl aside from her looks. She rediscover herself through her writing, expanded her world and changed gradually. I want to write a story like this, and so the story evolved this way. It was the same for Ao who gave suggestions to Hiyuki, he enjoys reading, but reading wasn’t equivalent to his life.

I gave a lot of thought about reading and writing because of the nature of my occupation, but I the experience would vary from person to person so it was fine.

Hiyuki project herself into her work, while others would separate their work from themselves like Sakutarou, and I feel that most professional authors were like him.

As for me, it could either way. However, when I wrote a piece that was completely not writing about myself and people ask: ‘Is the author speaking from her experience?’, I will feel troubled.

If everything is about my experience, then the scenes and plots would be planned really fast. The same for the character Ao, although I included my experience as a manuscript screener inside, but Ao’s thought wasn’t a hundred percent equivalent to mine. I hope everyone can understand that Ao and me have different opinions too.

The illustrations are done by Eihi-sensei. With just one colour illustration, you spurred boundless imagination, a really amazing illustrator. I like the unassuming Cyan, it makes me smile.

Next month, 22nd July, Shueisha Dash X Bunko will be retailing ‘Nefarious alliance of S and S’ Volume 1. You might be able to guess the direction the story will lead from the title, it is a memorable story and I hope everyone can take a look.

‘Vampire’ volume 5 will be published at the end of August, I will be glad if everyone can purchase this book.

Every word the characters said about creative writing left a deep impression in my heart. It is my honour to be the illustrator for this book, Thank you. 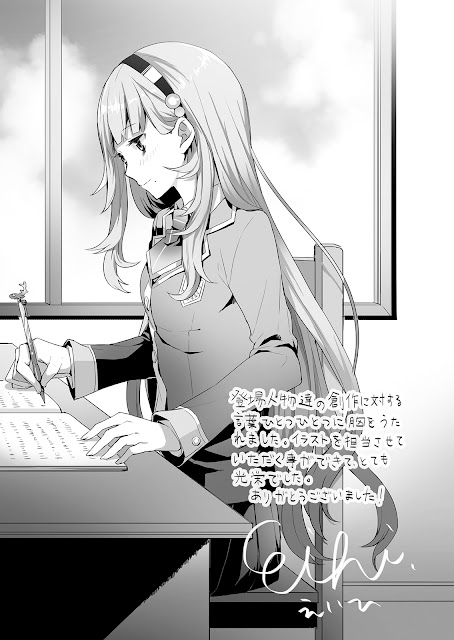 Stay informed of NEWEST chapters of Manuscript Screening Boy and Manuscript Submitting Girl with notification directly sent to your email.