“W-What is this place…which way..”

Fleeing as if swimming through the blue night.

Passing through the hip length barley fields, and coming out of a grove of date trees.

I ran frantically towards the small hill of the unknown country.

The moonlight, fortunately, was bright enough that it appeared blinding to the eyes that had gone accustomed to the dark.

Surveying the four directions, the wheat fields extended far throughout the horizon.

This place, it ain’t Japan at all…

The fields expanding before were just simply too endless. An unknown scenery with groves of trees. Even a spec of artificial light couldn’t be spotted, let alone human habitation.

I stopped at the sudden sense of despair.

A howl could be heard with the wind that left a strange eerie feeling.

I don’t have the leisure to be confused.

I’m being chased. Those ugly ‘Failures’ were chasing me with a steady pace.

I didn’t even have a single cloth on. The cell phone grasped in my left hand was my last possession.

In contrast to my impatience, my limbs which had grown thin in the underground dungeon didn’t move as I wished.

I literally clashed hard against the ground, and half fainted in agony, without being able to pick myself up again.

The sounds of footsteps treading the grass could be heard, it was close.

They found me!! I almost reflexively hugged my head and rolled up into a cocoon while trembling. 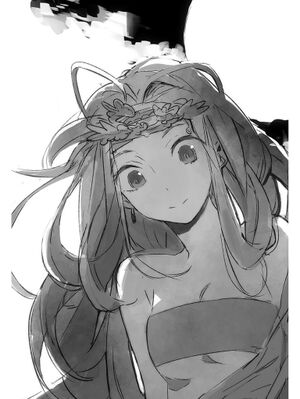 I opened my eyes fearfully.

Unexpectedly, a tender pair of hands pulled me up into a sitting position.

And then, I saw her.

“My Lugal<King>. So we finally meet.”

A baby-face which was strangely fascinating. Just like a fairy from a fairy-tale.

She wore an old fashioned long dress that reminded me of the ones from a foreign country I once saw.

And my head was placed on her lap.

She wasn’t a ‘Failure’. Who is she? And what the hell was she saying?

My heart had gone into a fear frenzy, and my ears rang insanely.

The second most important thing next to my life, the cell phone which I had dropped when I tripped was now in her hands. I was instantly dominated by a frenzy that even surprised me.

I seized her neck from below as if I was to strangle her.

“Our meeting here is our <Destiny>.”

The girl with the sunset coloured hair just smiled at me, even though I was tightening my grip on her neck.

In the night sky as the background, a full moon floated beside her face.

I slowly removed my hands from her neck, while fighting with the violent frenzy inside of me.

Why was I driven by such killing intent? I don’t know what to do anymore. The ringing in my ears is almost making me go crazy. The feeling of fury which was completely foreign to me was trying to lead me astray.

I just cried, while being confused.

A white hand touched my ragged face covered with mud, sweat, and tears.

Her eyes were close enough for me to touch, and as if I was imprisoned by those enchanting eyes, my body stopped moving.

A face devoid of any emotion, as if she was a complete different person from just before. Her eyes whispered.

And for some reason, those words weren’t for me, but felt like it was for something deep inside of my eyes.

And just like that, the overwhelming ringing in my ears started to calm down, and then it disappeared altogether. And the frenzy I couldn’t do anything about also disappeared, as if it was a farce from the beginning.

Did I hear wrong? I just met her but she said my name just now.

It seemed like a small muttering escaped from her lips.

I don’t know why, but this girl knew me!?

The question I was finally able to let out, was obstructed by a howl which ripped through the night sky.

Close, it was right there.

Before my wandering line of sight, I saw them. The monstrous figures right at the bottom of the hill.

A man with a crocodile’s head, a panther with three human heads, a woman who grew countless beasts’ legs. They gathered one by one with their glowing eyes and salivating mouths.

“Failures”. Those who quit being human.

“You don’t need to be afraid anymore. Because I’ll protect Souya.”

I’ll be dragged back to that dark underground!

The current me who was seized by fear calmed down suddenly after those words filled with confidence.

She stood up, and headed for the bottom of the hill without a hint of fear.

No. It’s dangerous. You’ll be devoured.

She returned a bright smile to me who was rashly telling her to stop.

She turned around after saying that. And from her back, phosphorescence started to scatter about.

From yellow to orange, than it turned scarlet.

An aura that resembled a heat haze, it changed its colours rapidly on a moment’s notice.

The light on her back which resembled wings rose towards the heavens as if matching with her strides.

She calmly walked towards the ‘Failures’, who as if being overwhelmed, looked at her with a distant view.

But the ‘Failures’ gathered one after another and quickly formed a ring to surround her. The measly bit of ‘reason’ they had was immediately replaced by ‘bestiality’.

The artificially created beasts with a thirst for blood simultaneously attacked the petite girl.

“I have determined your <Destinies>.”

Even though she was far away, that sentence which felt like a verdict filled with mercy could be heard quite clearly.

And then, everything was dyed in a dusk coloured light.

Stay informed of NEWEST chapters of Lugal Gigam with notification directly sent to your email.